Technology is rapidly evolving, and, in this context, it is just a matter of time until its multiple facets move in convincingly in the education field. Virtual Reality, Augmented Reality, or even the implementation of Artificial Intelligence can provide various advantages to any curricula. However, the primary condition of a successful deployment is the reason behind the use of technology, and that is the learning objectives themselves. Using technology just for the sake of technology is useless if it’s not meaningful to students’ learning, and in fact, it becomes counterproductive to the adoption efforts of the technology because students and faculty quickly get the impression that it is just a gimmick.

With this in mind, we present you below one of our implementations of Virtual Reality (VR) in a sociology course at Concordia University.

When the iconic Molson Brewery of Montreal announced in 2018 that it would move its offices out of its original building (established in 1786), a hidden piece of Montreal’s history resurfaced onto the public sphere.

One of the many significant events that the brewery witnessed in its 200 years of history was the rise and fall of the Faubourg à m’lasse, a working-class, Francophone neighbourhood located next to the brewery, along the shore of the St-Lawrence River.

In the 1960s, on the order of the City of Montreal, this entire neighbourhood was demolished to make room for new urban mega-projects as the city attempted to modernize itself. Today, the Maison Radio-Canada occupies the land where the Faubourg once stood.

What happened to the 5000 residents of the Faubourg who had to be moved, relocated, evicted? What was their story? How did it all happen?

These are just a few of the questions that Concordia University’s “SOCI 280 – Debates & Challenges in contemporary Quebec Society” is trying to answer. The course provides students with a sense of Quebec’s history and demographics, a basic knowledge of provincial social policies, information pertaining to culture, identity and language issues, and key concepts useful to anyone who aims to live and work in Quebec.

Having received a mandate from Concordia University to deploy new Virtual Reality technology in the curriculum, the course became a prime candidate to leverage this new technology for multiple reasons.

Firstly, the professor was interested in bringing the story of the Faubourg to the students. The course focused on Quebec’s history and society and included a lesson dedicated to Montreal’s history.

Secondly, the team faced the challenge of breathing life into material that pertained to something that no longer existed: the Faubourg was demolished in 1963. The students could not visit the district today in order to relive its history.

How can we bring the student back to the 1960s so that they could witness the life of the Faubourg residents? How can we get the students into contact with this vanished piece of Montreal history in an engaging way?

Virtual Reality’s ability to fully immerse gave us an answer: we could, literally, bring the students back to the Faubourg in Virtual Reality.

Fortunately for the team, before its demolition, the Faubourg had been meticulously documented with photographs, film footage, testimonies and audio recordings. Using this trove of archival material as a reference and consulting records from the CBC/Radio-Canada and Bibliothèque et Archives nationales du Québec (BAnQ), the team reconstructed a historically authentic Faubourg apartment of the 1960s virtually in a game engine. 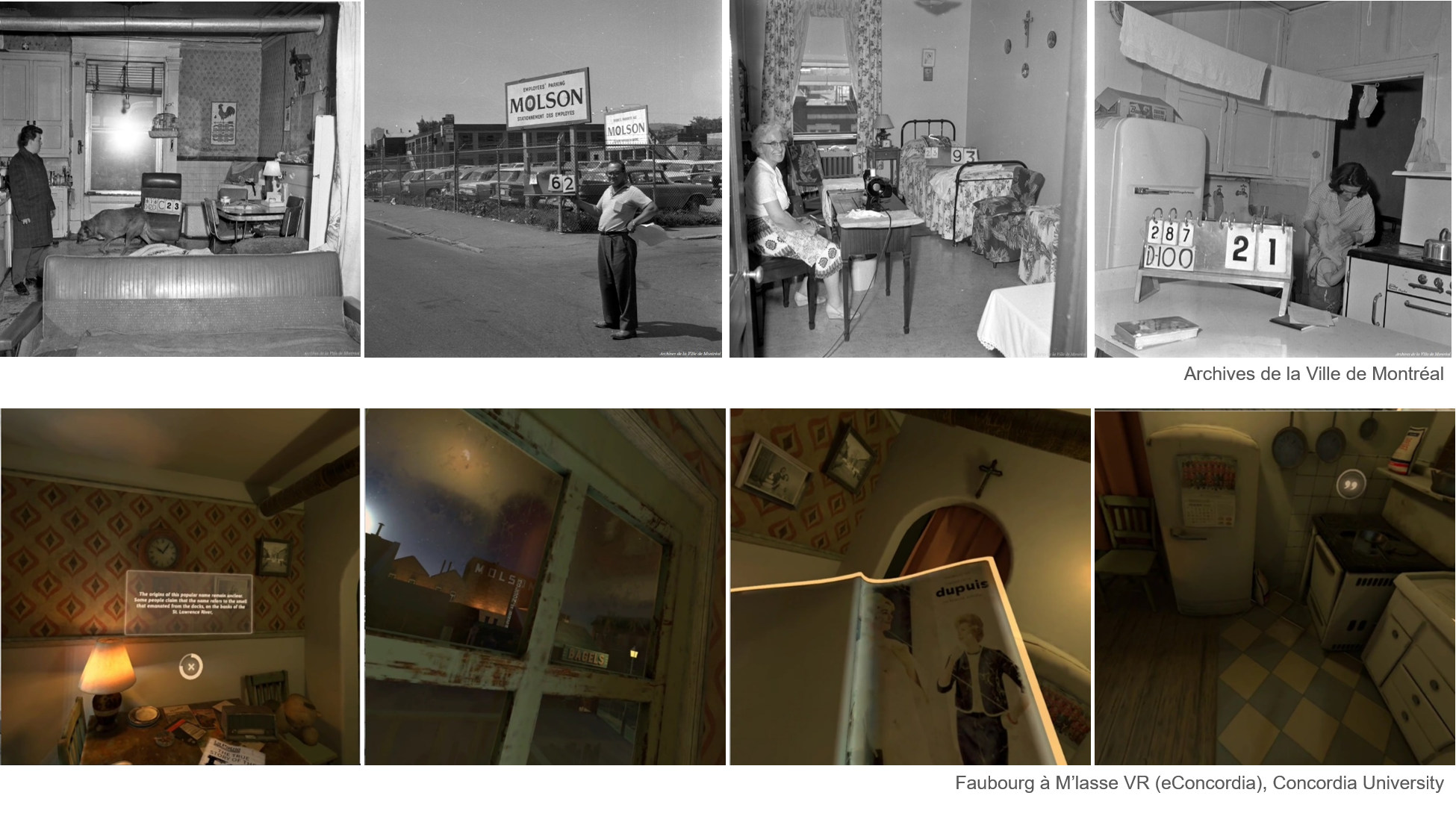 In the completed experience, students can explore an apartment of the Faubourg of the 1960s. As they do so, they come into contact with historically accurate publications, radio music, television footage, photographs and many other daily life items of the era. Through this exercise, they can discover the life of the Faubourg residents. They are also accompanied by a narration that offers them additional context on the history and final days of the Faubourg before its demolition.

The production lasted three months. The team was a blend of learning experience designers who focused on the pedagogy, game designers who dove into the interactions of the experience and technical artists and programmers who worked “under the hood” in the game engine to bring the Faubourg to life as an interactive and living world.

The production team also produced documentation on the best practices of VR implementation in order to help the University prepare for ramping up its integration on campus.

The professor played the role of the progenitor of the concept. It’s our firm belief that people should drive technology and not the other way around. Therefore, learning objectives, pedagogy and the professor’s vision were paramount when developing the project.

The course professor served as the ultimate authority on the content selection and learning objectives: the professor established the overall content structure of the experience and researched in parallel to provide the specific pieces of information that helped the team craft an experience that would be coherent and consistent with the rest of the course. This was to ensure that the introduction of the new technology would be as seamless as possible, whether it is on the content or pedagogy front: the Faubourg visit would not feel out of place or parachuted in thanks to the professor’s participation in content curation.

In contrast, the specific implementation of the content, giving it form and functionality in an interactive experience within the game engine, was entirely handled by the production team and did not involve the professor. This division allowed the professor to focus on pedagogy and content, whereas the production team handled all the technical aspects of the integration.